Topical issues in Politics and in the News - Articles, Videos etc.
​​

Gerard Ryle led the international team that divulged the Panama Papers, the 11.5 million leaked documents from 40 years of activity of the Panamanian law firm Mossack Fonseca that have offered an unprecedented glimpse into the scope and methods of the secretive world of offshore finance. Hear the story behind the biggest collaborative journalism project in history.
​
Here is the link to the video:
http://www.ted.com/talks/gerard_ryle_how_the_panama_papers_journalists_broke_the_biggest_leak_in_history

​In Nice, the French are starting to ask the difficult questions

How did Hitler rise to power? - Alex Gendler and Anthony Hazard

The Fallout from the "Leave" vote - Brexit

TED - Talk
​Why Brexit happened - and what to do next

Liverpool University professor says claims were ‘at best misrepresentations and at worst outright deception’
A leading legal academic has said the campaign for the UK to leave the EU was “criminally irresponsible”, in a scathing assessment of how the referendum debate was played out.

Michael Dougan, professor of European law at at the University of Liverpool, lambasted the Leave campaign’s inability to define what Brexit would entail, which has led to uncertainty among financial markets and a 31-year-low for the pound sterling.
He said in a video posted on Facebook: “Leave conducted one of the most dishonest campaigns this country has ever seen.
“On virtually every major issue that was raised in this referendum debate Leave’s arguments consisted of at best misrepresentations and at worst outright deception.“And by doing so – by normalising and legitimising this type of dishonesty as a primary tool to win votes, I’m afraid that Leave have inflicted quite untold damage on the quality of our national democracy.”

To watch video: click on this link:
http://www.independent.co.uk/news/uk/home-news/brexit-eu-referendum-michael-dougan-leave-campaign-latest-a7115316.html
​
2nd July 2016
​Brexit’s grisly first week, and the misery ahead, have already provoked buyer’s remorse. More than 4m people have signed a petition calling for a re-run of the vote. An instant rejection of the result would be wrong. Although we regret the Brexit vote, 34m people have cast their ballot and the result was clear. A straight rematch would be no fairer than allowing England’s footballers another crack at Iceland, which inflicted a second humiliation a week after the referendum.

And yet Britain’s fate is still highly uncertain. Although Britons opted to leave the EU, Brexit comes in 57 varieties. The mildest sort would be an arrangement like Norway’s, involving continuing access to Europe’s “single market” in return for the free movement of people from EU countries and a contribution to the EU budget. At the opposite extreme, Britain could cut its ties entirely, meaning no more payments into the EU budget and no more unlimited migration—but no special access to the market which buys nearly half Britain’s exports, either. Voters were told they could have it all. They cannot.

The Norwegian option would do the least damage to the economy. It would also be the best chance to preserve the union with Scotland and Northern Ireland, both of which voted Remain. The ruling Scottish Nationalists, who lost an independence referendum in 2014, always said that Britain’s leaving the EU would justify another ballot on independence. They are right—especially since in 2014 many Scots voted to stay in Britain in order to remain in the EU. But independence would be painful: it might mean promising one day to adopt the euro and hardening the border with England, with which Scotland trades more than it does with the EU. Under a Norwegian-style deal, Scots might prefer to stick with England. The Nationalists should wait to see a deal before asking for a new referendum.
​
In Northern Ireland Brexit raises other problems. One is the prospect of resurrecting the border between north and south, a dismal piece of symbolism which might be avoided if Britain got a Norwegian settlement. Another shamefully overlooked snag is that Britain’s exit from Europe will break the Good Friday Agreement of 1998, in which Northern Ireland’s peace process was underpinned by the EU. This treaty has kept the peace in the UK’s most troubled region for nearly 20 years. Fixing the mess will be an urgent task for the prime minister.

Who should that be? Tory party members, who have the final say, may favour one of the victorious Leave campaigners, a mediocre bunch who have disgraced themselves during the campaign: lying about inflated budget payments and phantom Turkish migrants, before vanishing after the vote when the Brexit hit the fan. None of them would make a worthy prime minister. And yet the very falseness of the prospectus they flogged may be their best qualification for the job. Britain’s next leader must explain to 17m voters that the illusion they were promised—all the EU’s benefits with none of its obligations—does not exist. Only when the authors of the Brexit fantasy themselves return from Brussels without this magical deal might Leave voters accept that a compromise is necessary.
Daily chart: Britain votes to leave the European Union 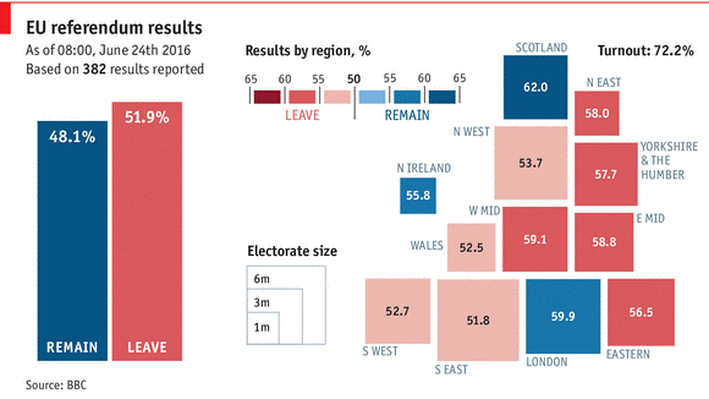 ​European leaders are in no mood to negotiate with their bolshie neighbour. That is why Britain should delay as long as it can before invoking Article 50 of the Lisbon treaty, the mechanism for a Brexit negotiation, which sets a two-year deadline. For every extra month that the cost of Brexit sinks in, the possibility of a fudge will increase. Angela Merkel, a champion procrastinator who, like her French and Dutch counterparts, faces angry elections next year, may also feel that accommodating some British demands, such as allowing an emergency brake on the free movement of people during “surges” (perhaps applied across the EU), would be possible, though she may find it hard to sell the idea to other European leaders.
​
Given that nearly half of British voters did not want out, it is likely that a majority might prefer a Norwegian compromise to complete isolation. Whatever deal takes shape in Brussels will be so far from what was promised by the Leave campaign that it will surely have to be put to the British public again, through a general election, another referendum or both. It is even possible that the whole notion of Brexit may stall. A thin majority have said they would prefer life outside the EU to life inside. But it may be that, when faced with the question of whether to endorse a Norway-like deal that entails many of the costs of being in the single market without having a say in the rules, many would rather stay in the EU after all.

Negotiating over Brexit will stretch the tolerance of both British voters and European leaders. Yet the EU specialises in muddled compromises and talking its way around referendums. After months of economic hardship, and a recession-induced fall in immigration, British voters may be ready to think differently about the balance between immigration, the economy and their place in Europe. By far the most likely outcome of this sorry situation remains Brexit. But it would be wrong completely to discount the possibility of an inelegant, humiliating, and yet welcome, Breversal.
Please check back later for these definitions
​28 juin 2016

Republic of Ireland Football supporters in Bordeaux sing:
​"Stand up for the French Police" and
"Allez les bleus"!

To read this article in the Guardian, you can go to:
https://www.theguardian.com/football/2016/jun/15/england-and-russia-fans-brawl-in-lille-at-euro-2016
April 2016

Kim Philby: I got away with treachery 'because I was upper class'

In a video recording of a speech given to Stasi agents in 1981, uncovered by the BBC, Philby also described how he was able to walk out of secret service headquarters every night with his briefcase stuffed with secret documents and reports.
http://www.theguardian.com/world/2016/apr/04/kim-philbys-stasi-tape-reveals-secrets-of-his-success-as-cold-war-spy
13th March 2013